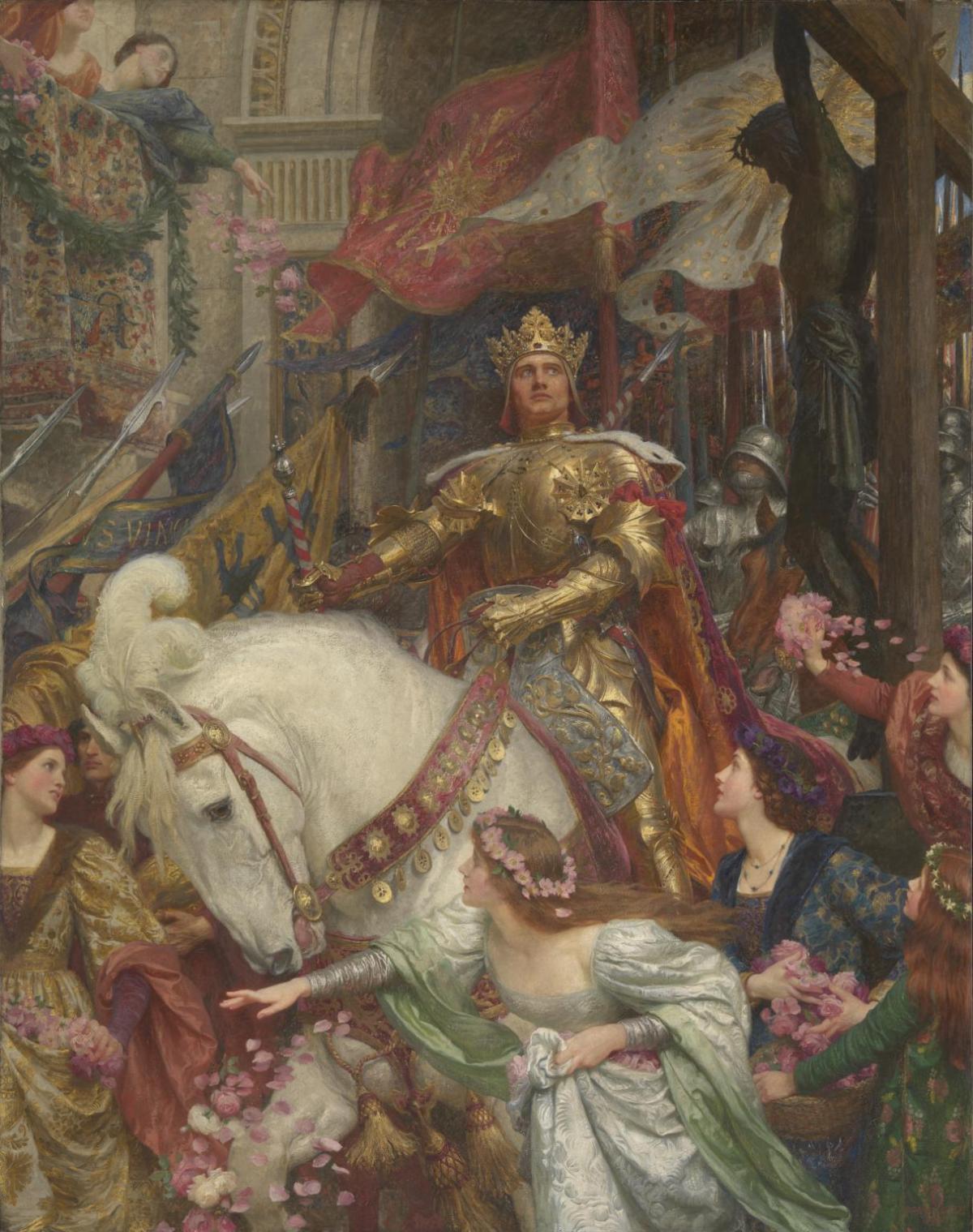 Christ’s present role in glory is referred to as his “heavenly session.” Session means “sitting.” Presbyterian churches have a form of church government led by elders, who collectively constitute the session. The body of elders is known as the session because when they meet to deliberate, to establish policy, and to give supervision to the spiritual lives of the Christians under their care, they sit down and discuss these things. Likewise, when we say that Congress is in session, we mean that our representatives are assembled, and in their seats, ready to transact the business of the United States. The word session is appropriate to describe these situations because it is derived from the Latin sessio, which simply means “the act of sitting.” The most important session of all is the session of Jesus Christ in heaven.

In Psalm 110 God sets the Messiah at his right hand as king and priest—as king to see all his enemies under his feet, and as priest to serve God and channel God’s grace forever. This picture is applied directly to Jesus Christ, who since the Ascension actively reigns in the mediatorial kingdom of God. This was the early church’s confession and framework for Jesus’ rule.

Ephesians 1:20–23 that he worked in Christ when he raised him from the dead and seated him at his right hand in the heavenly places, far above all rule and authority and power and dominion, and above every name that is named, not only in this age but also in the one to come. And he put all things under his feet and gave him as head over all things to the church, which is his body, the fullness of him who fills all in all. Acts 2:34–35 For David did not ascend into the heavens, but he himself says, “‘The Lord said to my Lord, “Sit at my right hand, until I make your enemies your footstool.”’ Hebrews 1:13 And to which of the angels has he ever said, “Sit at my right hand until I make your enemies a footstool for your feet”? 1 Peter 3:21–22 through the resurrection of Jesus Christ, who has gone into heaven and is at the right hand of God, with angels, authorities, and powers having been subjected to him.

In the NT world the triumphal procession was developed by the Romans to celebrate the occasion of a major victory. The victorious general or ruler in ceremonial dress would drive his captives – usually those of high status – and the spoils of war before him through the outer districts and into the very heart of Rome. When the victor arrived at the god’s temple, the prisoners, or representatives of their number, would be executed. In this processional the glory and power of Rome was celebrated, with the triumphant general playing the role of Jupiter, the god who had blessed the warrior with victory in battle. Then distribute the wealth to his followers. Paul employs the image of the Roman triumphal procession to depict the victory of Christ on the cross. Ephesians 4:7–8 But grace was given to each one of us according to the measure of Christ’s gift. Therefore it says, “When he ascended on high he led a host of captives, and he gave gifts to men.”

How does Paul understand his own Christian life amidst these realities? 2 Corinthians 2:14 But thanks be to God, who in Christ always leads us in triumphal procession, and through us spreads the fragrance of the knowledge of him everywhere.

Paul is not portraying himself as one of the high-ranking officers in Christ’s army but as a former enemy and persecutor of Christ, who has been conquered and is now marched as a captive, constantly being led to his death. Paul isn’t the plunder; Paul is the defeated enemy paraded before God the Father, a prisoner of war made slave, made son and heir. And Taking up the Cross and following Jesus, he will be led to a crown.

The plunder is the Cascades and chardonnay and the pyramids and big ben and the amber waves of grain. The plunder is the fullness and glory of the kingdoms that were conquered. Paul sets forth the paradox of his apostolic ministry: in his weakness and Christ-like suffering the power of the triumphant Christ is made manifest.

Following Christ is following him in His triumphal procession. We are the defeated enemy made slave, made sons. The Way of the cross led to the crown of Christ. The path of Christ’s exaltation, resulted in the heightened glorification of His body in heaven, reflecting our own path to final glory.

Jesus did not go to the cross alone. Galatians 2:20 I have been crucified with Christ. It is no longer I who live, but Christ who lives in me. And the life I now live in the flesh I live by faith in the Son of God, who loved me and gave himself for me.

This is why the ascension is so important. Christ bore humanity into the very presence of God, the Father, to the right hand of glory and majesty and power. Those who have ears to hear it, this is not a metaphor. This is your identify. This is who we are.

These are the practical implications of living out what it means to be united to Christ by faith. The indicatives of the gospel drive the imperatives for our lives – a triumph of grace in which divine love goes forth in sacrifice.

2 Corinthians 4:17–18 For this light momentary affliction is preparing for us an eternal weight of glory beyond all comparison, as we look not to the things that are seen but to the things that are unseen. For the things that are seen are transient, but the things that are unseen are eternal. 2 Corinthians 5:1 For we know that if the tent that is our earthly home is destroyed, we have a building from God, a house not made with hands, eternal in the heavens. Hebrews 12:1–2 Therefore, since we are surrounded by so great a cloud of witnesses, let us also lay aside every weight, and sin which clings so closely, and let us run with endurance the race that is set before us, looking to Jesus, the founder and perfecter of our faith, who for the joy that was set before him endured the cross, despising the shame, and is seated at the right hand of the throne of God.

C.S. Lewis said that, “If you read history you will find that the Christians who did most for the present world were just those who thought most of the next. The Apostles themselves, who set on foot the conversion of the Roman Empire, the great men who built up the Middle Ages, the English Evangelicals who abolished the Slave Trade, all left their mark on Earth, precisely because their minds were occupied with Heaven. It is since Christians have largely ceased to think of the other world that they have become so ineffective in this. Aim at Heaven and you will get earth ‘thrown in’; aim at earth and you will get neither.”

Then get your eyes off of this world. It’s a paradox, but this is the way of the cross that leads to a crown. You were led captive into the house of God, a conquered enemy made eternal Heir. In Christ, sitting at the right hand of power, you are overcoming the world. It is the only way.

So, look to Christ and pursue Christ.